JUMP TO HORSES AVAILABLE FOR PARTNERSHIPS

A licensed trainer since 1984 Kathleen Demasi’s first winner was the first horse she saddled. She has recorded 745 plus wins to her credit, among them multiple stakes winners Tj’s Tuff as Nails and Pennsylvania-bred turf filly of the year Merry Princess. Kate has emerged as a perennial leading conditioner at Philadelphia Park. Currently ranked fourth on the leading trainer standings, Kate has 26% winners from starters. READ MORE>> 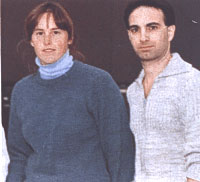 The Petruskas don't have a monopoly on successful husband-wife partnerships in the Mid-Atlantic. Trainer Kathleen (Kate) DeMasi and her husband Greg have been operating Pewter Stable in Mullica Hill, NJ, since 1984. "She trains, and I run the partnerships," said Greg. a 40-year-old native of Philadelphia whose dad, an internist, would take him to Delaware Park. "We'd play on the swings while he played the horses. Before I learned to read, I read the Daily Racing Form."

Pewter Stable has an elaborate website. An initial screen shows a swirling horse as the introduction program loads before the image morphs into a horse at the finish line. A second screen is labeled "Producing winners all the way" and a third "The Pewter Stable."

Browsers can then watch a video of one of Pewter Stable's stars, $300,000-plus earner Merry Princess, winning stakes race.

The creators of that website have different backgrounds. Greg majored in business administration at Widener College in Philadelphia. Kathleen, 38, is a former assistant trainer to Richard F. (Diekie) Dutrorow. She also trains for individual owners. "She was raised on a horse farm," Greg said. "She basically was born into it." She's been running her own stable since 1984 and presently has a stable of 40 horses she races in Maryland, Delaware, Philadelphia, New York, New Jersey and West Virginia.

Pewter Stable still has its best horse, multiple stakes winner Tj's Tuff as Nails, a 12-year-old gray mare in foal to Silver Charm purchased for $15,500 at a 2-year-olds in training sale in Ocala, Tj's Tuff as Nails won five of 27 turf starts and three of 12 on dirt, bankrolling $217,908.

"She raced in partnership and they retain interest," Greg said. "There were four people in that one. We will market the baby and they will get the same percentages." Pewter Stable currently has 20 partnerships involving 20 to 25 horses. "Most of them are race horses, a small percentage are pinhooked yearlings and the rest are claimers or 2-year-olds," Greg said.

Investors take anywhere from five to 50 percent of a horse and spend as little as $2,500 or as much as $50,000. "I have people at all different levels," DeMasi said. "The pluses to me are you're minimizing your risk. You give people an opportunity to spread the risk around. That's the chief advantage. The minus is you have to get along with others. If you're the kind of owner who wants to call all the shots, being in a partnership is not for you."

Princess Proves To Be The 'Very One' at Pimlico! 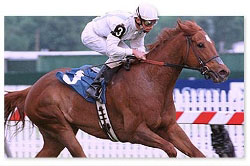 POLISH NUMBERS' MERRY PRINCESS charged to a 1¼-length victory in the $75,000 The Very One Stakes at Pimlico on the Black-Eyed Susan undercard. Ridden by Ramon Dominguez, MERRY PRINCESS improved over her second-place finish in this race one year ago. She covered the five furlongs on the grass in :56.67, finishing ahead of Maypole Dance. Scootin' Girl finished third.

"She loves the course," said winning trainer Kathleen Demasi. "She never ceases to surprise me and always does something extra."

"I had a ton of horse on the turn and nowhere to go," added Dominguez. "Finally a lane opened up and I was able to get through and it was over."

MERRY PRINCESS is owned by Pewter Stable and was bred in Pennsylvania by Elizabeth Hendriks. She has now earned better than $200,000 lifetime, from eight wins in 19 tries to become POLISH NUMBERS' 31st career stakes winner highlighted by 8 graded stakes winners and a champion.

Cherry Hill - one of the problems of racing in this area has been the lack of any new blood breaking in the trainers rank. But Trainer Kate DeMasi and her husband, Greg, have, for a while now, made people stand up and take notice of them.

Showing an incredible "in the money" percentage of 74%, the DeMasi's have shown that hard work and determination can have its rewards.

Kate credits a lot of the success with her husband Greg's work at the claim box. "Greg spends a lot of time going over horses and looking at hours of tapes on various replays of races. He gets so much respect from other horsemen that when they see him look at a particular horse, they will promptly check their notes on it" quips Kate.

"We have a few nice looking Pennsylvania breds, all of whom have not started yet, that I expect big things from over there at Philly" claims Greg. I would like to get to a point of developing more and more young horses each year. I firmly believe that is the future of any quality stable."

Whether it is developing young stock or contimiing success in claiming, it is encouraging to see this young, bright couple make such and impact on a sport that is in desperate need of some young blood

Tj's Tuff as Nails was "good, just a little tired" yesterday morning after cpturing the $35,000 Lewis Morris at the Meadowlands on Friday night. "Butthat's to be expected" said Greg DeMasi, assistant to trainer Kathleen DeMasi.

Tj's Tuff as Nails went over the $100,000 mark with the victory in the five-furlong turf race, improving her record to five victories in 14 starts. Plans for her immediate future are uncertain but Greg DeMasi said she may come back to the race a little quicker than usual.

"We usually give her three to four weeks between starts", he said. "But there are a couple of races that are intriguing including a 3-year-old stake in the middle of next month. We'll see how she bounces back."

Published August 30, 1997 in the Thoroughbred Times

After subscribing to Thoroughbred Times for several years now and reading about the countless accomplishments of big-time trainers, such as D. Wayne Lukas, who are constantly given horses that are the cream of the crop, I would like to give well-deserved credit to my trainer, Kate DeMasi.

After watching my horse, T.J.'s Tuff as Nails, run third place in a stakes at Pimlico, I could only reflect on what a remarkable accomplishment this horse and trainer have done. T.J.'s Tuff as Nails is a six year old turfmare who has been stakes-placed at two, three, four, five, and now, six. More remarkable is the fact that this is an East Coast turf mare who gets a four month break every winter, yet DeMasi always has her ready. In fact, T.J.'s Tuff as Nails has finished no worse than sixth in her career.

I would like to see more credit given to the local trainers who keep this industry moving, despite not having the million-dollar wallets to back them up.